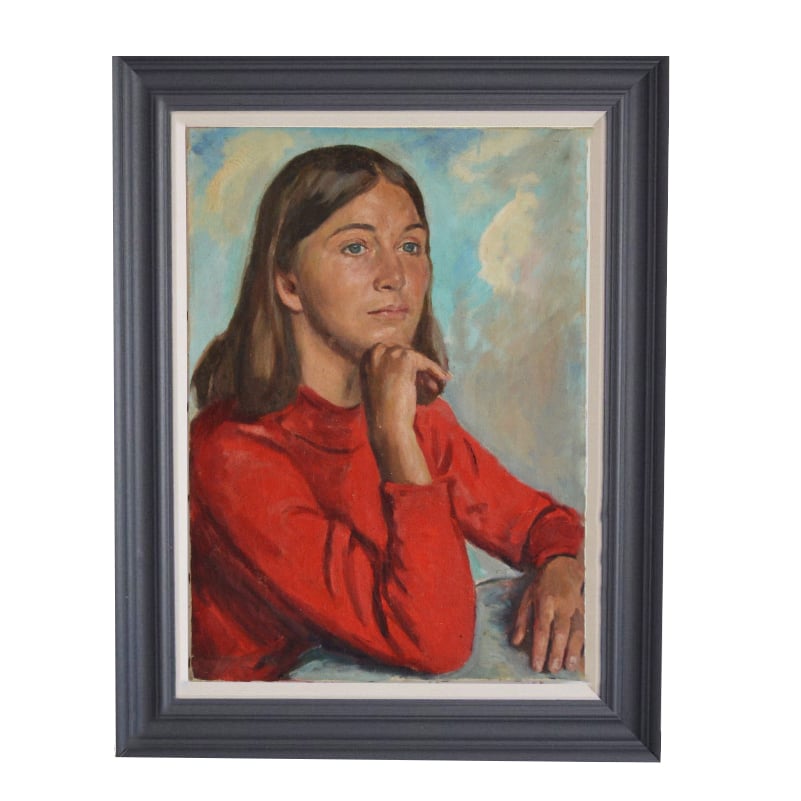 Enigmatic portrait of the the artist's wife, Marjorie Mostyn, by St Ives artist, John Leonard Fuller (1891-1973). Such a lovely piece, the crimson of her jumper contrasting with the bright blue 'heavenly' sky as it breaks through the ochre and peach clouds. Loosely painted in a post impressionist manner. A calm and thoughtful portrait which is somewhat bewitching.

Leonard Fuller (1891-1973) was a noted portrait and still life painter. He attended the Royal Academy Schools just before WW1, winning the British Institute scholarship in painting in 1913. While serving in the Machine Gun Corps on the Western Front, he met fellow artist Borlase Smart, and they decided that if they survived, they would move to St Ives after the war to open a painting school.

Although Smart did move to St Ives soon after the war, Fuller married fellow painter Marjorie Mostyn, and for the next 20 years pursued a career in teaching in London. However he did eventually move to St Ives, starting the St Ives School of Painting in 1938 with his wife, which has worked out of Studio 13 at Porthmeor Studios ever since.

He soon became involved with all aspects of life in St Ives, serving as chairman of the St Ives Society of Artists. After the war Fuller was a founder member of the Penwith Society of Artists, and with his sympathetic views to new ideas and modernism, he helped support a new wave of artists such as Barbara Hepworth and Ben Nicholson. His school of painting was also an invaluable resource for several of the younger artists who gathered round St Ives including Terry Frost, Peter Lanyon, Bryan Winter, Wilhelmina Barns-Graham and Sven Berlin.