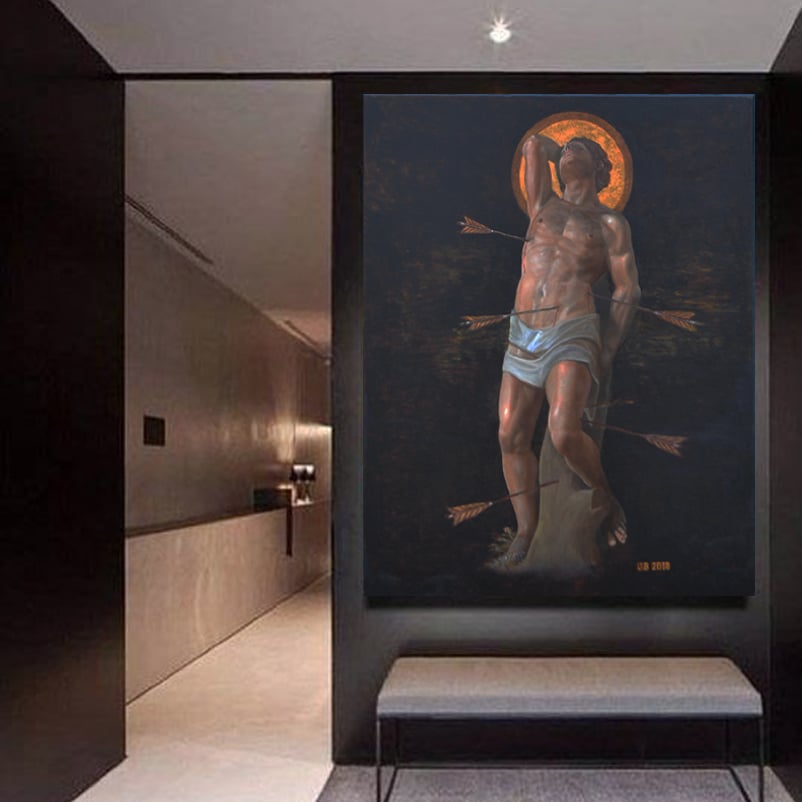 From Bartlett’s group of works, ‘Historical interference.’ Bartlett worked at the National Gallery for many years surrounded by the paintings of the great masters. In this dramatic piece St Sebastian, pierced through with arrows gazes heavenward in pain and religious ecstasy.

John Bartlett studied at the Royal Academy Schools London 1991– 94. His work is held in private and public collections throughout the world.

In January 1997 his monumental work ‘History Painting’ was included as one of the main exhibits for the opening of the Museum of London’s new “London Now Gallery.” A student work that took a year to make it chose recent British history as its subject matter depicting the 1990 Poll Tax riots in Trafalgar Square. This piece received enormous media coverage across the country.In January 1999 this work was purchased for the Museum’s permanent collection where it remains on display. In 2010 the work was reproduced on 9x18ft posters on the London Underground as part of the promotion campaign for the opening of the Museum's newly refurbished Modern Galleries.

Other early notable works were a commission for Heathrow Airport in 1995 and the painting ‘Cars and Chaos’ 95/6 (Guildhall Art Gallery London) that was included in the touring exhibition ‘The Motor Show – powered vehicles in British Art’ which travelled to different Art venues across the country during 1996/7.

A major mid-career retrospective 'London Sublime' (Oct 12th - Jan 20th 2013) at the Guildhall Art Gallery London. The exhibition will present over fifty of his paintings & drawings,allowing the public for the first time to view the diversity of his work. During the course of the show Bartlett will be producing a 25ft wall drawing entitled 'Rise of the Invisible' that makes reference to the 2011 London riots.