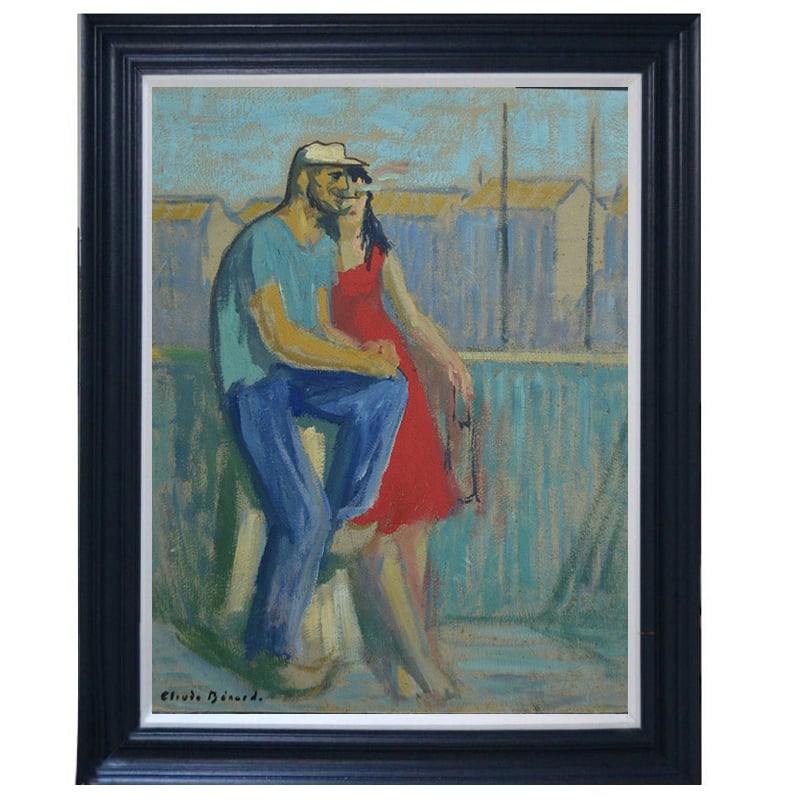 Narrative oil on board by French artist Claude Benard (1926-2016).
A sailor on shore leave perches on a bollard his gal in a red dress at his side. Loosely painted almost in a sketchy manner in vibrant turquoises and denim blues, perfectly contrasted against the pillar box red of her dress.

Claude Benard was born in Cholet in 1926 but shortly after his family moved to Angouleme (1928), where he was to live until his death in 2016. Studying at the Ecole des Beaux Arts in Paris and also in the studios of Cheyssial and Fougerat. At the age of 21, he began exhibiting at the Salon des Artistes Francais. After time traveling to broaden his artistic experience he returned to his home town to continue painting professionally. He became a Professor at the Ecole des Beaux Arts in Angouleme from 1957-1980.

Benard exhibited with numerous prestigious institutions throughout France and abroad, including the Salon des Artistes Francais, Salon des Independants and the Salon d'Automne, Paris. He was the holder of more than seventy awards. In 1978, he founded the Cercle Angoumousin des Arts and in 1979 organised a Salon of Contemporary Art in Angouleme bringing together celebrated artists from the Charente region. His style evolved from figurative in the 1960's, through to Surrealism into the 1970's and onwards. Four tribute exhibitions of his works were held in Angouleme in 1972, 1984, 2001 and 2017.