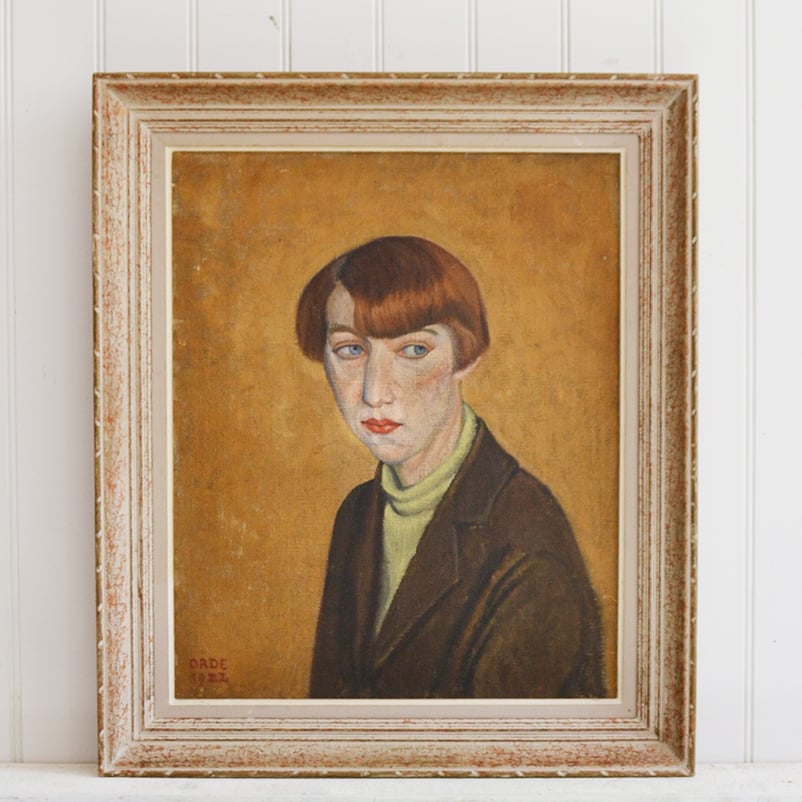 1922, exceptionally rare, female portrait by Cuthbert Orde (1888-1968). Famous for his male portraits of fighter pilots this unusual female portrait is a treat. Superb ochres and Caramac tans, the sitter, in her pea green polo neck and tweed jacket, glances stage right, her blue eyes heavily lidded, her coral lips sullen. The glorious asymmetric hair cut is the crowning glory of this magnificent piece.

Cuthbert Julian Orde was a first world war flying officer serving in the Royal Flying Corp from 1914 and relinquishing his commission in 1919.

Throughout his life Orde strongly identified himself as an artist. In the early 1920s Orde worked from his painting studio in Paris, the original home of this painting.

His entries in phone directories for forty years – 1929 up to his death in 1968 – register him as him ‘Orde, Cuthbert; Artist’.

Having been hired to produce illustrations of bomber stations in the summer of 1940, Air Commodore Harald Peake from the Air Ministry saw some of Orde’s drawings was impressed by his portraiture. It was the height of the Battle of Britain and public attention was focused on the fighter pilots. Peake asked Orde to make a large number of portraits of them, Orde enthusiastically agreed, and at the start of September set off to work.

It is unclear how many portraits he drew in the year or so with Fighter Command. Some sources say up to 300, though Orde only lists 160 in his book Pilots Of Fighter Command.
What is clear is that he only drew a small fraction of The Few.