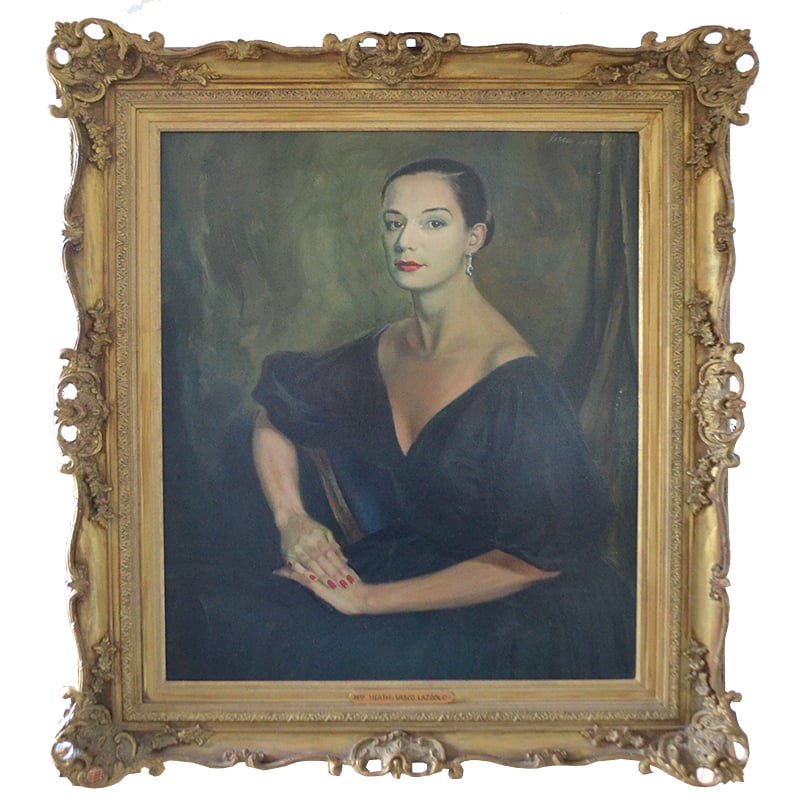 Vasco Lazzolo was born in 1915. He studied at the Liverpool School of Art and the Slade, establishing a successful career as an illustrator of book covers and fashion magazines in the years leading up to the Second World War.

Following the war he was much in demand as a portrait painter, moving easily between London's high society and the seamy Soho demi-monde. He was a member of the notorious Thursday Club, which met for luncheon every week in a private room at Wheeler's restaurant in Old Compton Street; David Niven, Cecil Beaton, and Lord Louis Mountbatten were regulars, and the Kray twins and Kim Philby were rumoured to have visited on occasion. During this period Lazzolo produced sculptures of his friend the Duke of Edinburgh, (one of the 24 close friends who attended Prince Phillip's stag night), and the actor Peter Ustinov, both fellow Thursday Club members, and the writer William Somerset Maugham. He was also commissioned by the Maharajah of Cooch Behar to paint a portrait of his mistress, the model and sometime actress Vicki Martin, who was killed in a car crash shortly after the portrait was completed. Martin had previously been sketched by Lazzolo's friend, society osteopath Stephen Ward. The two men had first met at the Slade during the War, when the art school had been relocated from London to Oxford.

Ward, who studied art at the Slade School in his spare time, was also a friend of the Duke of Edinburgh, and in 1961 was invited to paint him at Buckingham Palace. Today, Vasco Lazzolo is most often remembered as one of the few people prepared to testify for the defence at Stephen Ward's Old Bailey trial, during what came to be known as the Profumo Affair. Like other witnesses for the defence, Lazzolo had apparently been threatened by Chief Inspector Samuel Herbert, who told him that if he gave evidence on Ward's behalf, he risked being discredited, perhaps with the 'discovery' of some pornographic material in his studio and a subsequent prosecution. It is a measure of Lazzolo's regard for his friend that he took the stand, and was himself faced with a number of damaging allegations of impropriety.

Following the trial judge's hostile summing up, Ward took an overdose of barbiturates, and was in a coma when the jury reached their guilty verdict. He died without regaining consciousness on 3 August 1963, but repercussions from the scandal contributed to the downfall of the Conservative government at the following year's general election. Establishment figures had long since distanced themselves from Ward and Lazzolo's louche milieu. Little is known of Lazzolo's subsequent career; in the early 70s he was living in Malta, and it was there that he died, in 1984, at the age of 69.