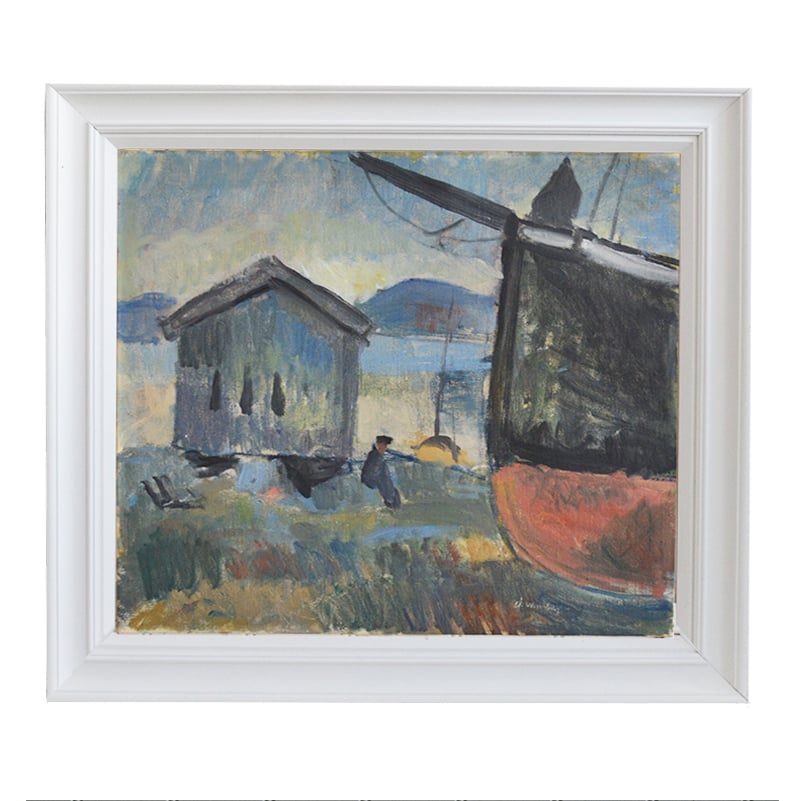 Enigmatic, mid-century, Swedish seascape by Åke Winnberg (1912–1974) depicting a chap wearing a cap taking some time out between a fishing hut and the monumental curve of a boat. Smashing sky blues, chalky ash grey, with splashes of sulphur. Complimentary brick red hull of the boat. Interior designers Utopia.

Winnberg came to Gothenburg where he studied advertising at the Slöjdföreningens school. During his study he was inspired by Torsten Billman and from teaching he himself said that the drawing and the cohabitation with the students gave him the best education. When several of his college students continued their education at Valands, Winnberg chose to work on his own, but always tested the findings conveyed to him from previous study colleagues. After World War II, he traveled on a couple of study trips to England and France. Separately exhibited works in Gothenburg, the Gothenburg Art Gallery and the Lilla Gallery in Stockholm. He participated in representative collective exhibitions with Gothenburg art in Turku, Dublin and at Liljevalch Art Hall in Stockholm as well as a number of collections in Gothenburg. His art consists of landscapes, farm interiors and city motifs from the Gothenburg tract made of oil, watercolor or in the form of drawings. Winnberg is represented at, among others, the Modern Museum, Borås Art Museum and Gothenburg Art Museum .